Hotel Camarillo is now on Amazon Prime! It is also available for digital rent or purchase. You can click on the direct link link below.

After one month of release on Amazon Prime, Hotel Camarillo has had 2500 viewers (90% of the viewership is in the U.S.)

The viewership for this past week was the highest yet, so the film numbers are on the rise and it hasn’t peaked yet. Thank you to everyone who still supports Hotel Camarillo.

HOTEL CAMARILLO and  NIGHT STALKERS  are now available for rent or digital download on I Bleed Indie.

The first entries under the new Real Paranormal documentaries to the site!

“Hotel Camarillo” is a 67 minute documentary focusing on paranormal investigations over the past 10 years at former Camarillo State Mental Hospital. Using a decade of archival footage, EVP, ITC, and photos along with new interviews with the investigators, “Hotel Camarillo” is the complete history of paranormal activity in the old abandoned buildings, some that no longer exist on the campus.

​I will be streaming live from The Oman House tomorrow starting at 8:00pm PST.

Check out the videos shot at this very haunted Southern California home. Subscribe to the YouTube channel which is updated regulary with actual footage of the phenomena happening in The Oman House.

Come and see #HotelCamarillo @ #ComikazeExpo2015 !
One of the scariest paranormal documentaries ever about the hauntings at the infamous
Camarillo State Mental Hospital. The unofficial inspiration for The Eagles song, Hotel California!

I had a small screening of “Night Stalkers” on Saturday. It was projected via a digital projector on a white wall. Tough room of my closest skeptical friends, but they enjoyed it!

While everyone else was watching it, I was cringing at the pixelation, poor lighting, scenes that ran too long, etc. There’s one scene in particular I’d like to re-do, if the person I interviewed is up for it. Based on Saturday’s screening, I’m doing a third “final” edit of the doc, tightening up some scenes, removing the “sharpen” video effect that just makes everything grainy, fixing some sound issues, replacing a couple captions, and just general tweaking all over.

There was one scene that a few people I consulted agreed may be misleading, so I’m going to replace it. There’s two sections where EVPs are played that I may drop. Laymen in the audience heard nothing at all. The one EVP presented by investigator Louis Gonzalez was quite clear, and impressed the most hard line skeptics in the room.

On August 6th, 2011, “Night Stalkers” will have its first public viewing at STU-CON 2, at Linda Vista hospital! Scott Gruenwald and Boyle Heights Paranormal Project are converting the old chapel into the Wayne Poe Theater! Too funny!

Some may not realize that this really is a zero-budget production. I have no crew to lug around lights for me, or sound techs, or anything else. This was filmed much like an embedded reporter in a war zone would film a report. I became part of the paranormal investigators I have been following. Anything else would have been distracting to the process.

What you will see and hear in “Night Stalkers” is raw audio and video. I will not clean up most of the audio because of something I learned from the investigators early on – EVPs happen largely in the white noise generated by the recorders themselves or the outside noise of the environment. When audio is enhanced to clarify a captured EVP, it will be stated onscreen. Many of the nightvision scenes will be adjusted for brightness, but where there’s unexplained phenomena present, I will show the unaltered footage as well. (So far, I’ve found none.)

I’ve often claimed to be an open minded skeptic, which I still am. This documentary isn’t an expose in a sense it will have any set agenda either way. I’m aiming for unbiased reporting on the subject. I don’t ask “hard hitting” or confrontational questions because it’s not my place to do so. This documentary is about the investigators themselves, and what they feel comfortable with sharing. No one was ‘put on the spot’.

Will that kind of approach make this a boring documentary? That’s up to the viewer. What it won’t have are jump cuts, dramatic music, special effects of scary this jumping out at the audience; etc. What I’m trying to say is, it won’t strive to look like the paranormal TV and movie documentaries that are out there today. Even if I did have the budget and crew to make “Night Stalkers” as slick looking and polished as other films on the same subject, I wouldn’t do it. I feel that the approach I took was an honest one.

Since I’ve neglected this blog for so long, I’ve forgotten to feature the long form trailer I released several months ago, so here it is!

I just saw “Insidious” tonight, and I promised a report to several people on Facebook! I’ll keep my review as spoiler-free as possible, but it would still be too spoiler-ish for a Facebook update. The movie is a great, scary horror flick. It has a few cheap scares, but it is intelligent with only a couple of silly bits. The characters are solid, but a few of my new friends might take exception to how the paranormal investigators are portrayed.

The movie revolves around a family of five, who have just moved into a new house. The husband and wife have two sons who look nothing like one another. I honestly thought the second son was a neighbor kid when he was introduced! They also have an infant daughter that cries. And cries. And cries.

Soon strange, hauntings revolve around the older son, and the couple decide to move to a different house. This doesn’t help matters at all. The couple finally call in a paranormal team at the urging of the husband’s mother, played by Barbara Hershey. (Who’s still hot!). The paranormal team consists of two nerdy guys who dress like Mormons, and are basically comic relief in the film. They are joined by a psychic who is played serious. The team uses offbeat equipment in their ghost hunting, which I’m sure real paranormal investigators will have fun debating. I didn’t see an EVP recorder, K2 meter, or infrared illuminator anywhere in the film.

The investigation proceeds to stir up the hauntings to 11, there are a lot of interesting theories thrown about that tries to explain the Afterlife and possession. The movie is smart and very well put together, and doesn’t settle for the typical conclusion, which is refreshing. Remember to stay until after the credits finish rolling!

This Friday I’ll be accompanying a new group of investigators. This is a different location than the rest; not a private residence or outdoor public place like Suicide Bridge. Hopefully I’ll have a chance to talk to the team members between the investigations and setting up. It’s interesting to see what equipment different groups use.

The costume shop investigation last month was called off at the last-minute, and I haven’t rescheduled anything with that group as of yet. There’s a big paranormal convention coming up soon that I have to make a decision on ASAP, and yet another new group has invited me along with them in May.

I put up a Facebook page for Seventh Planet Productions, which you can check out here. I’ll be adding a lot more photos soon, and I’m going to begin uploading pictures during investigations to that page as they happen. 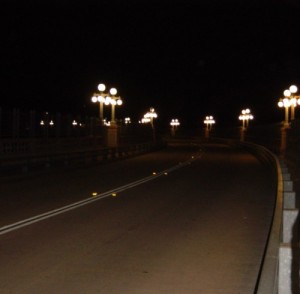 Saturday the 20th, I met a the paranormal group R.I.P, or Riverside Investigators of the Paranormal on Suicide Bridge in Pasadena. A friendly group, and they were easy to talk to.

This group brought along an Ovilus. At one point on the bridge, the device said “jump”. It was a general first meeting, and I plan to interview them further in the near future.

Next week, I visit a haunted costume shop with another new group!

Until recently, my friend Mike worked at a VFW post as a bartender for many years. It’s an old post that has served veterans since the late 30’s. There’s been many stories about alleged haunting there. I visited Mike there in 2007 to have him relate a few stories on video.

The project is coming along great. I’ve contacted a few other groups, and will be going on new investigations this weekend.In January 2008, I stopped by the haunted Adelaida Cemetery in Paso Robles, CA. It was difficult to find, but the many tree lined, windy roads made for great atmosphere.